Under the impulse of Kevin Annett, founder of an International Court of Justice for Human Rights (ITCCS), the peoples represented by their main dissidents unite to prepare the aftermath of chaos. USA, Canada, Australia, New Zealand, Greece, Ireland, Spain, Germany, France, Netherlands, Belgium… The “Great Chaos” launched by the false pandemic “Covid” is expected to be followed by an unprecedented economic crisis that will develop delinquency for civil wars before ending in world wars. Everyone can see that this Great Chaos is on its way. It was therefore necessary to analyze the reasons why this plan of the N.O.M. works so well and to find a remedy applicable in all countries, for all peoples. The real dissidents, called “conspiracy theorists” by those they bother, can all participate in the activities that follow the work of Julian Assange, Jim Tucker, Daniel Estulin, John Perkins, Jesse Ventura, Alex Jones, Hongbing Song, Pierre Faillant de Villemarest, Serge Monast.. 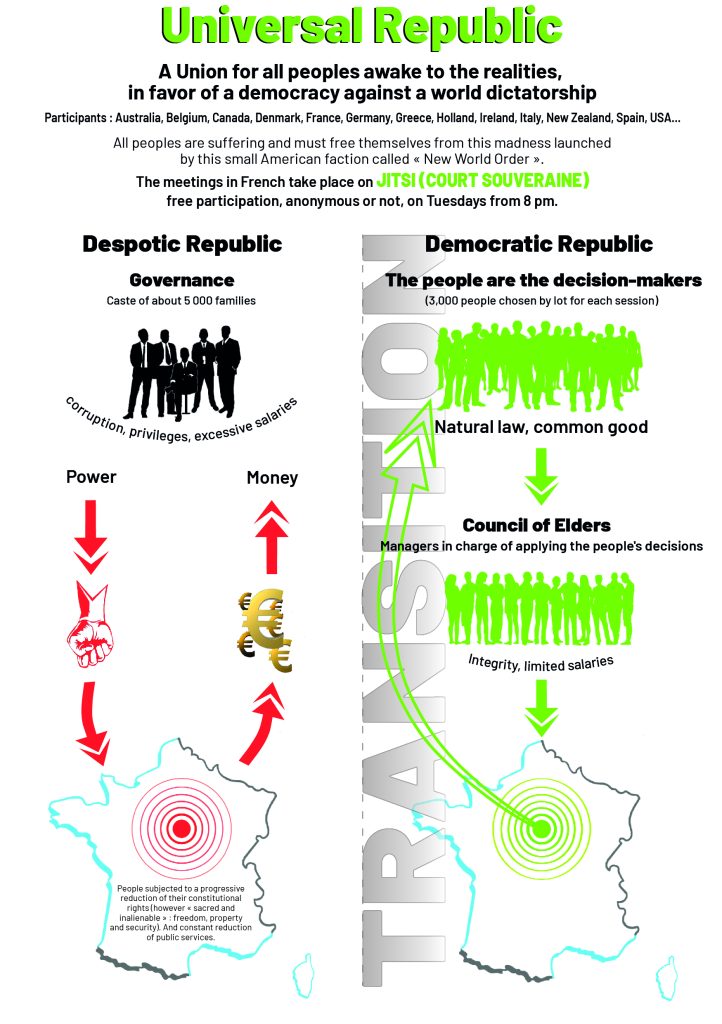 Natural Law inherently includes the “right to live” for all species, as already specified in various declarations guaranteeing  the human species its rights to freedom, to property, to security and to resist oppression, as being sacred, inalienable and imprescriptible; rights to which scientific evolution obliges us to add the protection of physical and mental integrity.

Aware of the fact that the present  republic clearly despises the “Sovereignty of the People” leading inexorably to the disappearance of nation-states, We, informed humans, invite all awakened people wishing to “get out of the system” to create the first republic based on a true democracy, that of the Common Good.

By definition, a republic (from res publica) defines a number of people choosing to seek the ‘Common Good’ for all, which defines an association of people who have chosen a  way of life based on common rules decided by the whole.

By definition, democracy (demos – the people and kratein – to command) represents the idea of a “Sovereign People”. This idea is accepted by most of the legal texts in force, both in France and internationally, as specified by philosophers such as Karl Popper (“a regime is democratic if it allows citizens to control their leaders and thus remove them from power without resorting to violence”).

Philosophically: In the current principle of a “republic”, the people are BENEATH the government and endure the laws made by the rulers, whereas the democratic concept requires the opposite: that the People be ABOVE the government.

The People make the decisions; the government is made up of people in charge of executing the decisions made by the People.

A “Universal Republic” would therefore be a true democracy applicable by all the peoples who would have the same constitutional basis.

The meetings on this internet space represent this Sovereign Assembly, whose decisions are recorded as resolutions that everyone can claim when approved by more than two thirds (67%).
In this case, the use of the WE THE PEOPLE allows everyone to speak on behalf of all, to invite experts or personalities on behalf of all, provided that all are informed and can participate freely in the debates which take place on https://meet.jit.si/COURSOUVERAINE every Tuesday at 8pm and Thursday at 9pm

The “BIG BOSS” of the nation-state thus becomes “We the People”, and everyone can take advantage of this, provided that the subject discussed has been dealt with and approved by more than 67%.

Article 1 : A Universal Republic will have neither president nor ministers, but an Assembly of the people (provisionally called the “Sovereign Court”), made up of 3,000 members drawn by lot for each of the major orientations to be taken (budgets, health, education, economy, defense, police, justice, science, etc.) or important decisions. This “Court” decides on the public life of the country.

This Court is hierarchically placed above the State and therefore above the government and all institutions.

In order to make its decisions, this Assembly may invite experts of its choice. Once it has gathered all the necessary elements, the assembly will be organized with 200 meeting groups, each of which will present their decisions. If the discussions last longer, every participant changes groups each day to ensure that ideas are exchanged. A general  synthesis concludes the meeting. This synthesis will be exposed to the population, who will indicate their agreement, or not, by a referendum.

Art.2 : Any decision or orientation taken by this Sovereign Court shall be submitted to a referendum and adopted if approved by more than 67% (two thirds).

Art.3 : A Wise Council shall ensure the management of the institutions of the State and the application of the decisions taken by this Court.

This Council shall be composed of “Wise Men” representing all social, professional, institutional, denominational and other considerations. Each of these bodies will determine freely its own methods. This Council is responsible for presenting and organizing referendums.

This Wise Council representing the Sovereign Court, will have all the armed forces at its disposal, an economic control body (Court of Auditors), a direct communication tool with the public (TV channel), and “Legitimate Courts” in all the tribunals.

Art.4 : The “government” will therefore be made up of managers in charge of the missions determined by the People.

This new mode of governance will allow the People to determine the budgets, prohibit all forms of dictatorship and wars and annihilate all possibilities of corruption.

In 2022, the survival of the human species depends on building a "NEW WORLD".

A political Transition is the cornerstone of a world revolution!

The survival of the human species depends on building a “NEW WORLD”.

The People will have to foresee a “Transition” between the old system and this truly democratic governance in the sense of the Common Good and the Sovereignty of the People.

Since the beginning of humanity, it is the “law of force” that dominates and this has led to the creation of all systems of domination, from “kings” to “religious authorities” through all forms of oligarchy, of which the republic of corruptors is the most pernicious system because it is difficult for the people to perceive. The First World War was used to establish republics in almost all nations. By presenting this system to the people as a “democracy”, it was possible to gain mass acceptance for its continuation.

The National Transition Council offers a new political concept that can be used in all countries where the people are also exploited by their leaders and wish to be free of them: it is the proposal to create a New World, and that we all do it together to manage our planet and all the species that live on it a little better, and this starts with a new political principle: Transition

This is a new concept in politics specifically invented to move from the old world to the new one, without chaos, without violence, and with the fair participation of EVERYONE.

The creation of a National Transitional Council (NTC), duly proclaimed and officially declaring a political pause during which the country becomes independent of all international organizations and treaties, so that its people are the ONLY ONES TO DECIDE of the laws and rules in their society.
This transition can also suspend all debts, considering that the “right to life” is more important than the “right to profits” especially those of already ultra-rich bankers.

This Council will consist primarily of volunteer dissidents, who represent the “Wise Council” and are responsible for establishing the building blocks.

This program will have three essential missions during this transition, along these major guidelines :

– The creation of a structure for auditing, analyzing and investigating the functioning of all state bodies.

– The establishment of an organization allowing all the country’s citizens to freely draft the new constitution.

When all the peoples will have adopted this constitution, there will be no more war, the budgets of the states will grow for health and education while the budgets of armament and control of the populations will not cease falling. The words peace and freedom will take on their full meaning.